Japanese press for Futari Shizuka – The Maiden from the Sea

Nice review by Yawara Watanabe in the magazine “Ongaru no tomo” – “The friend of Music” of June 2019.

Focusing on the TIMF Festival and our Futari Shizuka world premiere staged performance. Clic to enlarge the article 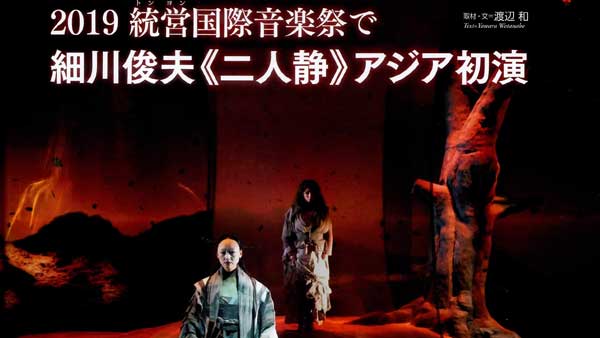 Kindely Translated from Japanese by Koichi Mori. {translation remarks or corrections in between {  }.

The Asian Premiere of the opera “Futari-shizuka” by Toshio Hosokawa,at The Tongyeong International Music Festival 2019 – Written by Yawara Watanabe

The Tongyeong International Music Festival has been held in Korea in honor of the composer Isang Yun and his music. This year, the 18th festival invited Toshio Hosokawa as the resident composer, and staged the Asian premiere production of his opera “Futari-Shizuka”, which was first showed in Paris in December of 2017 {recital style, not staged}. The festival also held orchestral concerts and chamber music.

The only German-style music festival of contemporary music in the Eastern Asia.

The Stage Director, Thomas Israel, created precise and beautiful stage which focused on the “Noh” acting by Ryoko Aoki, with overlapping videos on multiple screens.  The Ensemble TIMF, conducted by Shi-Yeon Sung, expressed the sensitive world of Hosokawa’s sound. ”For a chamber orchestra, my way of composing becomes more sensitive. I created it carefully to the subtle points. Actually I prefer such intimate works.” said Hosokawa.

March 29th, 22:00 p.m.: in the small hall where fever of the opening concert in the next door venue was remaining, the highlight of this festival, the opera“Futari-Shizuka” by Toshio Hosokawa, started as the Asian premiere.

This chamber opera, about 40 minutes long, was world premiered in Paris last December {recital version}, and revived last January in Canada as North-American premiere {half staged}. The ambiguous libretto written by Oriza Hirata, was based on the Noh work of the same title. In the original, a flower picking woman mets the ghost of Shizuka-Gozen at the Yoshino Mountain in full bloom of cherry blossom; she is here a refugee woman just out of a wrecked ship. According with such libretto, Hosokawa’s delicate music was developing. In this work, created for the singing by Noh artist Ryoko Aoki, two different kind of music, the Western  and the Eastern, encountered each other, and sublimed to hope for life.
Thomas Israel, who was highly praised as the video design creator of “Pelléas et Mélisande” in Kanazawa & Tokyo last summer, took multi-part in creating video, directing and designing stage. Before the beginning of the opera, Hosokawa’s “Voyage V” (for flute and chamber orchestra) was performed, and the movie {by Brazilian artist Kika Nicolela} described the scene where the refugee Helen came to meet the ghost of Shiuka-Gozen. {Nicolela} beautifully expressed the fantasy that Shizuka-Gozen and Helen were fusing in peaceful dancing with skillful video projection.
This production fascinated the full audience at the small theatre, which is in discussion to be brought to Japan.
“The video is well thought out, and also well detailed. At first during rehearsal, I was not so sure about video projecting, but now I believe in this style because it is so respectful of this work and clear, that helps the audience to understand. But I want to see it as an audience, because I cannot see any video while singing…haha” sayed Ryoko Aoki.