Tribute to Magdalenian midwives, guardians of the cave.

Eve giving birth in the river.

Engraving the walls with flints, painting with pigment on the curves of the cave, or projecting light to reveal pre-existing forms; the intentions are similar and merge throughout time: let the rock speak and reveal the forms that are sleeping there.

Small figure representing Magda, she moves through the rocks, melts into it, half-human half-rock … 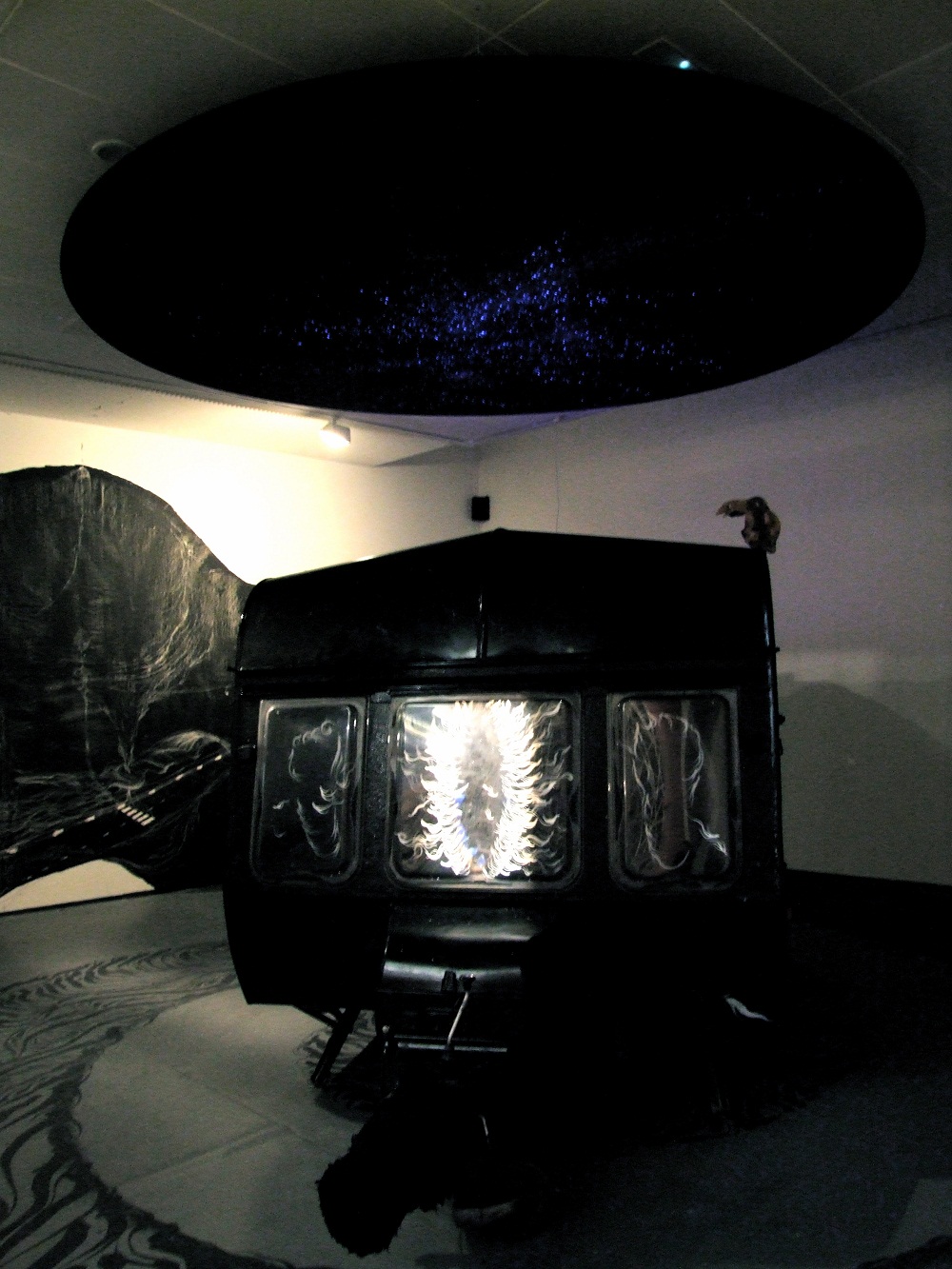 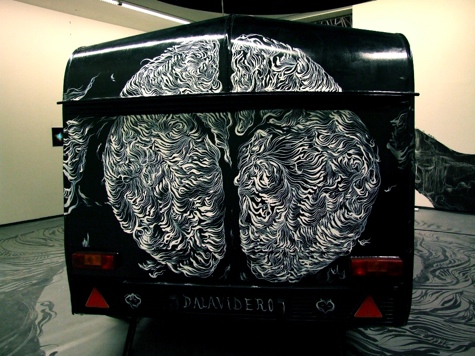 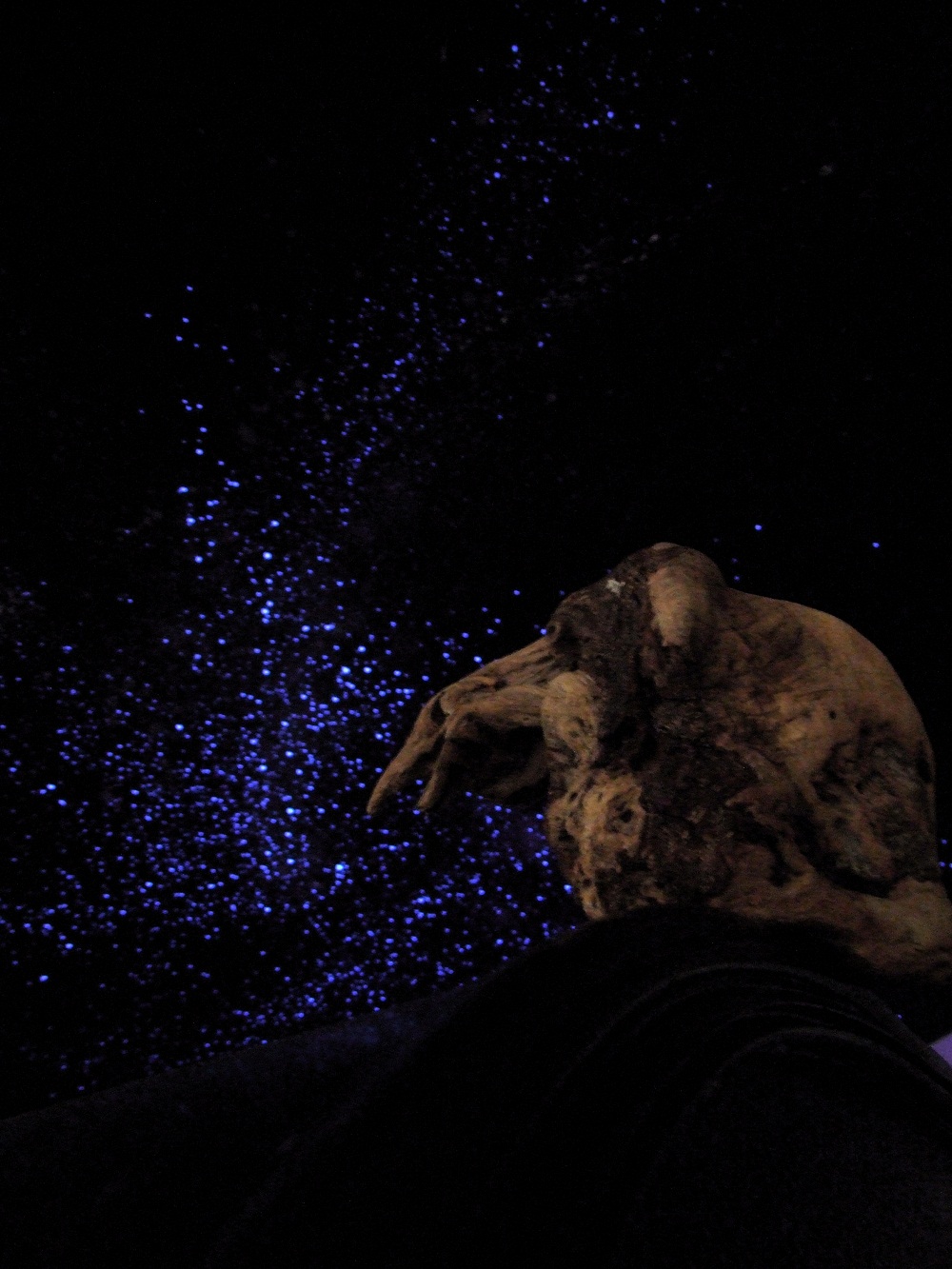 Thomas Israël is one of those very rare artists who has experienced the subterranean world. This unusual experience has enabled him to return to the origins of the image. Twice. First in 2009 for the DreamTime exhibition in the prehistoric cave at Mas d’Azil, jointly with Charley Case. Then in 2010, in the Saint-Maximin quarries (Oise), where he created a “Multimedia route through imaginary subterranean worlds” called Le Ventre du monstre (The Monster’s Belly). On both occasions, Thomas Israël experimented with a completely new approach to video work, as it was projected onto the actual rock. His contributions are precious, as they help to reopen access to “the world beyond”. In other words, they open up the mythical part of the subterranean world. We are thus able to revisit a dimension of art and human culture that the western world has striven to forget, deny and eradicate for centuries. The world beyond is a notion that stems directly from the native cultures of hunter-gatherers across the planet. It takes us back to the central position that the witchdoctor or shaman held there. A healer, seer and rainmaker rolled into one, but also a guarantor of collective and individual cohesion, the shaman carries out his various missions by negotiating with the invisible and spirits, those of ancestors and the dead. He visits them by means of a trance or in caves, to seek solutions to problems here below. These two means of access enable him to enter altered states of awareness that provide visions which will guide him in his task. Based on this so-called “shamanism” theory, eminent prehistorians such as the South African David Lewis-Williams and the Frenchman Jean Clottes shattered the interpretation of Palaeolithic parietal art. They also reopened debates on the invention of the image and the very nature of art. They saw cave art as being intimately connected with these processes. It is true that in many traditions, the cave is clearly considered to be like a passage opening into the spirit world and the cosmos. It also generates visions that the first shaman artists in history, at the turning point of the late Palaeolithic era, circa 30,000 B.C., traced on the rock face. One of these prehistorians, Jean Clottes, was touched by the work at Mas d’Azil, where Thomas Israël and Charley Case were invited to work in a chamber at the end of the cave. Their project consisted of awakening “images that were sleeping there” whilst identifying the cave with a place for conception and birth. Rather like the prehistoric artists, they played with the crevices and the configuration of the rock surfaces to make images appear. Like those of parturition and birth, which they filmed with a young woman from the village in the river at the exit of the cave. Projected directly onto the cave wall, these images have the curious power of reviving the rock and turning it into a living cave, as if it were an immense, living being. This was how they took part in a curious adventure. They roused a disturbing human effigy that had been sleeping not far from there in a gallery for over 12,000 years! Indeed, the Mas d’Azil cave contains one of the very rare “realist” human representations from prehistoric times, with the head of a man painted and sculpted combined with the existing relief. Is it a portrait, a spirit or a shaman? Or all of these things? We shall never know. After having filmed it and brought it back to life in the video, this image was first reprojected in the cave on the surface of the wall in 2009. Secondly, for the DreamTime III exhibition in 2011, the two artists reworked the drawing of the portrait by combining  it with that of a half-human, half-animal, hybrid figure called “the sorcerer”, who also originated from prehistory in the Trois Frères cave, not far from Mas d’Azil. This video, projected in the chaos chamber in the heart of the cave, shows a drawing that consists of white lines. We gradually see the hybrid figure appear at the same time as a substance that rises up to the head before branching out into its antlers. The two artists symbolised the awakening of Kundalini, the vital energy that arises in the sacrum and spreads throughout the body into the cosmos, as mentioned in numerous shamanic stories. This energy is spread through the cave by guttural buck bawls which make the cave resound and shudder at regular intervals. The effect is astonishing. It profoundly disturbed the prehistorians, who felt as though they were reliving the very process of visions that the shaman artists at the time were able to see.